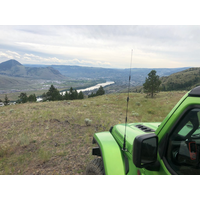 The 4WDABC is proud to announce a partnership agreement with Recreation Sites and Trails BC!

Last Friday afternoon, I received a signed copy of a partnership agreement between the Four Wheel Drive Association of BC (4WDABC) and Recreation Sites and Trails BC (RSTBC) for ongoing management and maintenance of the Lac du Bois ORV Park outside of Kamloops!

This has been a very long process, starting back in 2016 with the Board of Directors of Kamloops 4x4 Club, headed by their President, Charlie Denbigh, and carried on by Wes Kibble as a member of the Kamloops 4x4 Club and then Regional Officer for 4WDABC.

Along with Charlie and Wes, I was able to support the efforts in maintaining contact with our local RSTBC office. After a couple of meetings, It was indicated that we should have an agreement in the fall, so it was a tremendous surprise when I was contacted earlier this week with a request for Information to complete documents for a scheduled Wednesday meeting.

Charlie and I attended, where we reviewed the documents and the agreement was signed by the 4WDABC; then on Friday, I received the completed agreement.

The Lac du Bois OHV Trails are situated next to the City of Kamloops, on the north side of the Bachelor Heights Sub-division and adjacent to the Lac Du Bois Grasslands Protected Area. The park itself is about 468 hectares, with many trails running through which are shared by 4x4s, ATVs, motorcycles, hikers, and even a few cows using it as a grazing area. Also within this park are two designated mud pits. The park is accessed by several Forest Service Roads that connect from Kamloops northwest to Green Lake.

After a quick survey of the OHV Park, we will move forward with a small cleanup of the area, and start the arduous process of collecting nails (leftover from pallet fires) from the main parking area. Our goals for the year are to work on signage and to clearly define the boundaries of the park. If time permits, we will start marking trails.

I would like to thank Noelle Kekula, Communications Officer, and Calder Graham, District Recreation Technician, from RSTBC, for their willingness to work with our Association. Thanks also to all the 4WDABC members and volunteers who over the years have built our reputation across the province to make things like this possible.

The 4WDABC is very proud to work with individual clubs and members in all areas of the province to continue preserving “Public Access to Public Land”.

Once again, great  work Richard and Charlie! This is huge! Charlie, myself and other members of the Kamloops 4x4 club have been trying to work with Noelle on this for years. Apparently having an extra body in the office has been helping her work load a ton as we are finally getting responses on this and other inquiries.

A bit of back story on this. There is a bunch of history with the Lac Du Bois ORV park. The area has always been popular with the off road crowd as most of the trails have been there since the late 60's. I can remember attending club runs and off road races there in the 70's, 80's and 90's.  I have tons of racing photos from the area.. In fact, I stopped there to try my new to me 74 Bronco out on the way home after I purchased it in 1987. I also drove my first off road "desert race" there in the same year.. We ran both short course and long distance races in the area up until 1996. Ford filmed an off road racing TV commercial there in the late 90's and brought race trucks up from California for it. The current ORV area was literally 2 minutes from my house until I moved last month.

The park includes and is surrounded by ecological endangered grasslands that not only includes very sensitive grass but also hundreds of different species of animals and birds.. The surrounding area was made into a park called the Lac Du Bois Protected Area in 1996. Most people wanted to incorporate the ORV area into this new park.. Randy Chamberlin and myself attended multiple meetings and town hall meetings on behalf of the Kamloops Bronco Busters 4x4 Club. Due to the hard work of the local 4d4 and motorbike clubs, a section was set aside for the ORV area. I may be wrong but I believe this was the first ORV park in BC. However, the Bronco Busters folded shortly after and the GKMA never really did much with the land.

Charlie initiated talks again about 5 years ago for the Kamloops 4x4 Club to take on the park and improve it. Noelle was very interested and positive about it, even though a lot of the people in her office were not. She stuck with us and a few years ago an area of the park was designated as an official "mud bog " area. This was the first "mud bog" area in BC and was soon followed by others in Vernon and other areas. The Kamloops 4x4 Club hosted a number of  cleanups in the park and hauled thousands of pounds of garbage and nails every year. The mountain bike club, naturalist club and hiking club members also cleaned areas outside of the ORV park on the same day and brought their garbage back to the ORV area for us to bring to the dump. This helped maintain and foster good relationships with these groups.

Across the road is a series of hiking and mountain biking trails that is managed by the local mountain bike club. What they have done is a great example of what we should and can do. The trails are marked, mapped on a gps pdf map and maintained on a regular basis. The park has huge potential and is a great example of how multiple forms of OHV usage can work together.  The official mud pits, the steep trails that are great from beginners to advanced drivers, and some of the best views of the city. The pipeline runs between the park and city land and we are hoping we can use some of the extra rock from that for a rock garden. Obviously there is environmental concerns with the grasslands, animals and other stuff that we will have to be aware of.

This is huge folks! A big thank you to Richard and Charlie for sticking to it. Great job guys!